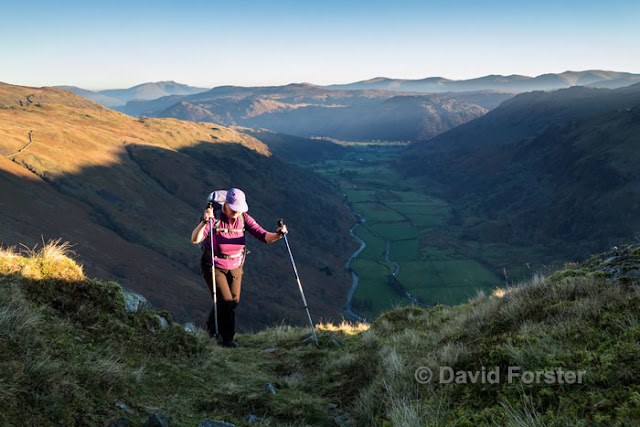 Of these two hills, Great Dodd was one of the “only one of us had done it variety,” while Hart Side was a new one to us both.

Parking at High Row we headed along the coach road for 600m or so before picking up the Bridleway alongside Groove Beck.  Crossing over Matterdale Common it was pretty icy in places and to say there was a biting wind would be an understatement. The views were great though.


A quick break at the cairn on Randerside left us chilled to the bone and it took a good stomp up onto the summit of Great Dodd to warm us up.

The windchill on top was really uncomfortable and I ended up with frozen fingers before I could even drag my camera out of its bag.  As a result we did not hang around and headed off in the direction of Watson's Dodd.

In the lee of Great Dodd we were sheltered from the wind and within ten minutes we had to stop and strip off a couple of layers.  Another ten minutes later and everything was back on again as the approach to the summit of Watson's Dodd.

Next stop was Stybarrow Dodd.

As there was very little shelter out of the wind we headed straight off towards White Stones where I knew there was some rocks just below the summit where we could have our lunch out of the wind.

We could have cut the corner off and headed straight for Hart Side, but instead we nipped over to the summit of White Stones.

Making our way across to Hart Side the wind was bitter and blowing straight from the north. I was pleased we had packed our winter kit despite the forecast blue skies.


From the summit we then headed for Birkett Fell and with the wind to the side now a much more comfortable walk.  The views from here along Ullswater were stunning – what a cracking viewpoint.

We were tempted to drop north east directly down the fell, but in the end took the less direct route using the wall leading towards Brown Hills as a handrail.  This made for a slightly longer walk but it was nicely sheltered from the wind.

Easy if rather boggy walking led down to the farm at Dowthwaite Head where we then followed the road back to our start point.

Wainwright’s  bagged: Great Dodd, Watson Dodd, Stybarrow Dodd and Hart Side, but having already done the others on previous walks we only get to tick off another two.