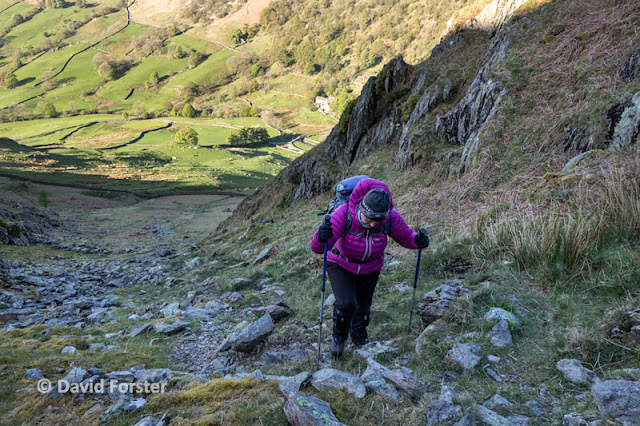 When we decided to attempt to complete the Wainwright’s one of the reasons was to encourage us to get onto hills we would probably not have either thought of doing, or indeed, did not think worth the effort. Sour Howes (483m) and Sallows (516m) are good examples in that they are relatively low is stature and tend to be overlooked in favour of higher neighbours such as Yoke and Ill Bell. In addition being located on the southern side of Kirkstone Pass makes them quite a drive for us, so all things considered they would not normally appear on our radar.

Parking at Church Bridge we made our way along the Garburn Road accompanied by a few fleecy early morning commuters.

The track is an old packhorse route linking Troutbeck with Kentmere. There are several similar ones here and after a few hundred metres we crossed another called the Longmire Road.

The Garburn Road runs along the lower slopes of both hills, but we left it after a kilometre or so and after crossing yet another track, this one is called the Dubbs road, we began making our way diagonally up the hillside on a faint path.  This is marked Applethwaite Common on the map and as height is gained there are good views over Windermere.

Just before the summit we came to a boundary wall.

After crossing the wall we found ourselves weaving between several hummocks, a few of which could probably lay claim to being the highest point of Sour Howes.

As usual we wandered onto the highest ones just for the hell of it. The Wainwright top however is a little knoll in the centre. As Moira often says when we are trying to find the exact spot, you can usually tell the Wainwright top as it always gives the best views regardless of whether it is the true summit or not.  This was certainly true here and the other main top we checked out, while appearing a similar height, did not enjoy such a good a outlook.

Moving on we began following a drystone wall towards Moor Head.  After a few hundred metres we crossed the wall on a stile and began the ascent of Sallows.  The going was easy if a little boggy in places and we soon found ourselves on the summit.

Celebrating the completion of another two hills with a coffee and a sarnie another couple arrived.  They were easy going Wainwright baggers too and like us happy to chat about all things outdoors. As is often the case when meeting strangers we had loads in common and as well as being keen campervanners like us, they actually had family connections in Teesdale where we live.

They were heading back the same way as us so we descended the hill together. We hardly noticed the 3km walk back along the Garburn road as we chatted about travels in common and put the world to rights.

All in all a great day out with some good company on two lovely little hills we would never have given a second thought to. As our Wainwright journey continues I suspect there may well be a few more gems like these hidden in plain sight.