I have just received the latest beta version of the Satmap Active 12, which comes with hi-res 1:50k OS GB mapping.  I think the unit is due for general release in the spring of 2014. 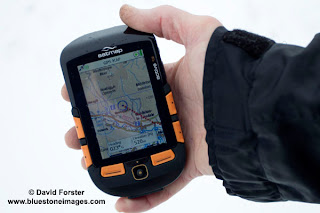 Receiving the unit has proved timely as I have just had a complete layoff from the hills for several weeks due to ongoing back problems and have only started getting back into the swing of things during the last few days.

Once the Beta Programme ends and the official release date is announced, it should have had plenty of use by then and I will post a review.
Posted by David at 08:20 2 comments:

It is odd how a single pic can instantly take you back. A snapshot in time that means little to anybody else perhaps, but in that millisecond produces the same feeling of excitement, fear and adventure. Being limited to light duties as it were until I get my back sorted again, I have just been sorting through some old pics and found this one of me looking somewhat focussed on the Camino del Rey (Kings Way), El Chorro, Spain. It instantly made the hairs on the back of my neck stand up and I felt that familiar buzz of adrenaline.


You might wonder why it invokes such feelings but this video shot by another climber (Copyright Daniel Ahnen) years later shows the walk in full. Sometimes I shudder at some of the things I did when I was younger, but more worryingly I would happily do it again.

Incidentally if you have ever watched the WW2 film Von Ryans Express.  This is the place where the train is attacked by the fighter planes, one of which crashes into the walkway.