Continuing my quest to locate and photograph as many of the military air crash sites in Teesdale as I can before they disappear completely, I have located two more sites.  The first one I thought may possibly have been lost from the records, but after a bit of research coupled with some local info, I eventually found it.  The second is a well-known but pretty remote site on the top of Dufton Fell.

Incidentally over the years there is said to have been around 54 aircraft that have crashed in Teesdale, leading to the deaths of 86 airmen.  I am not entirely sure of the accuracy of this statement which was reported in the Northern Echo on 02 July 2014 but it does perhaps highlight just how many losses there were in the wider area.  The article states the hills rise to 5,000 feet which is clearly wrong, plus the research I have done would suggest that the 54 incidents would include both the Teesdale and Weardale areas right up to the Cumbrian border, rather than just Teesdale itself.  I am of course happy to be corrected on this.

Walk 1 - Blenheim IV Serial: R3914 YH-W Near Middleton in Teesdale.
I knew a little about the story of this incident, which took place 26th November 1940 as the crew returned from a bombing raid over Germany.  The aircraft was one of seven that took off from RAF Watton in Norfolk to bomb a power station at Cologne.  The attack was a success and as well as hitting their objective some of the aircraft were also able to attack marshalling yards and docks in the area.  The attack was also successful in that it showed the Germans we could hit back at them even at this early stage in the war.

This aircraft unfortunately ended up over Teesdale and came down on moorland in the Middleton-in-Teesdale area.  Clearly this is a long way of course for returning to Norfolk and my assumption is the crew became disorientated and not knowing they were over high ground either ran out of fuel, or indeed while low on fuel descended and flew into the hillside.   The crew Sgt Harry Kenneth Collinge (Pilot), Sgt Douglas George Osborne (Obs) and Sgt Albert Moore (wireless) were all killed.

I had already had a look in this area previously and identified a possible location, however I couldn't find any physical evidence to confirm this.  That said over the years some historians/collectors have also removed artifacts for their private collections which meant there was little to identify where it came down anyway.

A few months after my first visit however, I was given some information by a local who knows the moors well and on my second attempt found some small pieces of wreckage among grass a couple of hundred meters away from the first location I had identified.  While these were fairly corroded they still had traces of paint on the underside and coupled with the fact the site is on the eastern side of the hill leads me to believe this is actually the correct location.

No memorial at the crash site exists, but I understand their names are recorded on a memorial at Deerbolt in Startforth, which is dedicated to all aircrew who lost their lives in the Teesdale area.   There is however some doubt as to the future of this memorial as houses are going to be built on the site.

Just after leaving the dam we came across a spring trap with a recently trapped stoat in it.

Once you leave the track at the dam head the walk onto Meldon is mainly trackless heather bashing interspaced with peat hags and the odd boggy bit. That said the views do open out quite quickly to the east across Cow Green and towards Mickle Fell

Warm days are a rarity up here and it was tempting to laze about in the sun, but as the actual crash site of the Wellington bomber is on Dufton Fell, some one and a half kilometres further to the west, we reluctantly dragged ourselves away.

On the way we had a look at some sheep enclosures and buildings that sit to the west of the summit at a height of around 700m.  The buildings are ruined now, but even when in use this must have been a truly bleak place to work.

Not long after dropping down from the summit we were forced into a rather meandering course as we made our way through bog and peat hags towards the crash site.  Fortunately I did at least have a grid reference for the site and we soon spotted the wreckage among the peat hags.

On reaching the wreckage the first thing I noticed was that all of the valuable copper and brass components of the aircraft had been collected and heaped together.

Despite such sites being protected by law I suspect these components will be heading off to a scrap yard somewhere.  The Gloster Meteor site I visited last year on Knock Fell has also been looted and considering how remote these sites are, and a vehicle is needed to move some of the heavier components, I will leave it to you to draw your own conclusions about who may be responsible. 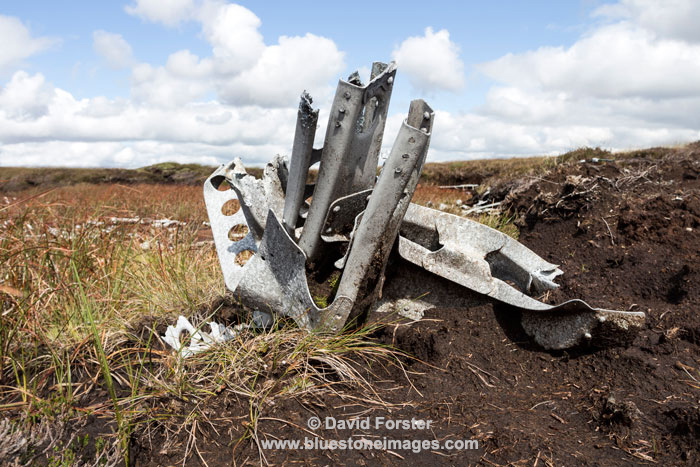 The background to this incident was the crew of the Wellington were undertaking a night navigation training flight on the night of 20th August 1942 and after getting lost in cloud crashed into the very top of Dufton Fell.  Fortunately the fell top is here fairly flat and made up of bog and soft peat and it was this coupled with the fact the aircraft came in at a shallow angle that meant all five of the crew survived.  The aircraft did actually break in two and take fire so they were lucky nobody was seriously injured or trapped.  Their luck continued and given just how remote this location is, they were very fortunate it was summer and were able to find their way off the hill to safety.

There is a great deal of history, be it human or natural, tucked away in these remote hills and on the way back we made a detour to look at a peat slide on Lodgegill Sike, the scar of which is visible from the track on the opposite side of Cow Green reservoir.  The exact date is known for this slide which took place on 6th July 1963 and was caused by a very localised thunderstorm.  The rainfall caused this tiny stream to rise to fifteen feet above normal and deposit many tons of peat into the river Tees.  In fact this slide along with another nearby caused so much peat to enter the Tees that water extraction at the Broken Scar water treatment plant 30 miles downstream in Darlington had to be halted for several hours on the 7th July as the peat sediment levels were too high.

This link has some pics taken by scientists working at Moor House at the time. http://nora.nerc.ac.uk/14996/1/MOOR_HOUSE_DT_CRISP_COMPRESSED.pdf

After this it was simply a case of making our way back to the dam head and back along the road to the parking area.  Distance walked 20K