To the north of Thornthwaite Forest above the Whinlatter pass there are five Wainwright's, four of which can be easily linked together to give a grand days outing.  The extra top of Whinlatter can also be added, but involves a detour through forestry via Tarbarrel Moss.

Our plan was to bag Graystones (456m), Broom Fell (511m), Lords Seat (552m) and Barf (468m).  This would, with only a little backtracking to take in Barf, give us our four Wainwright's. If time and energy allowed then Whinlatter (Brown How) would also be included.

Parking just before Darling How Farm we made our way up through Darling How plantation.  This involved a rather circuitous route, but it did at least bring us out of the forest not too far from the summit of Graystones.

Once out of the forest it was a very steep pull alongside an old wall before the ground flattened out just before the summit area.


We took in both tops before dropping down to Widow Hause.  Here we had a quick break before heading up onto the summit of Broom Fell.

After another quick break we made our way over easy if rather boggy ground onto Lords Seat.

Once on top we had good views over to Whinlatter and Brown How (525m) on the opposite side of the valley.  From here we thought we could work out a possible high route across to it via Tarbarrel Moss.  We have numerous single Wainwright's left to do, so grabbing Whinlatter today would save us a single hill outing.  Plus it looked like it would create a great circular route, providing of course we could find a way through the trees.

Convinced we could see a way through, we now turned our backs to our planned route and instead headed in the opposite direction to bag Barf.


On the summit of Barf a heavy hail shower caught us unawares by sneakily using Skiddaw for cover.

As a result we didn't hang around for long before the hail chased us back over to Lords Seat, where we avoided the worst of it by heading into the trees.

The going after this became a little confused when we found signs that told us we could not use the Tarbarrel Moss path.  Unsure of where we could go we dropped down into the forest to meet with the main forestry road.  Here signs told us we could go no further.  Fortunately, next to a mountain bikes only track, Moira spotted a vague path heading through the trees.  I was far from convinced, but after a steep uphill section we broke out of the trees onto Tarbarrel Moss itself.  From here we could see a vague path heading across the moss to meet with the main path leading onto Whinlatter.

In the Lakes the word Moss on a map tends to mean bog, so by the time we reached the main path leading up from the Whinlatter visitor centre I had wet feet. I really must get some new boots.

Next we continued along the ridge to Brown How.  This is a great viewpoint, but due to its forested lower slopes it was difficult to work out how we could get down.

After a false start we descended diagonally over some very rough and pathless steep ground towards Willybrag Gill.  Here we followed the forest edge east to reach the boundary wall coming down from Whinlatter Top. This was then followed down more steep ground until we hit the main forest road through Aiken Plantation.  After this it was a straightforward walk back to our start point.

That's 113 Wainwright's completed now.  Hopefully the next trip should take us below the hundred to do mark. 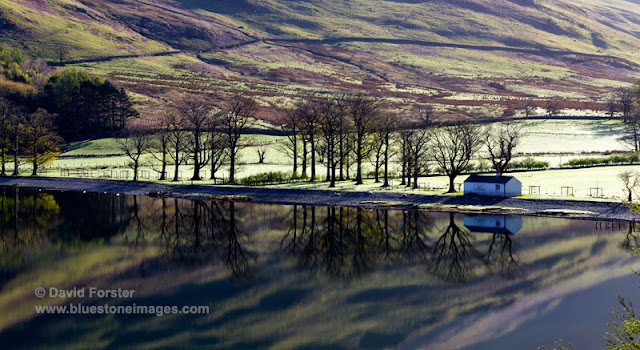 In contrast to our last trip to these fells where we did The Knott, Great Sca Fell and Coomb Height in the snow, this walk had a definite spring like quality.  So much so we were warmed by the sun and serenaded by Skylarks most of the way around.

Parking at Longlands we had a pleasant if occasionally boggy walk up to Trusmadoor.  From here it was a steepish climb up onto Great Cockup.  To start with the skies were uniform grey, but once on the summit a few breaks began to show through the murk.


Rather than bag the summit and charge off, we also visited the Western top before retracing our steps to Trusmadoor. Here we had a nice chat to an elderly chap who had completed the Wainwright's some time ago and was now revisiting some.

From here we made a short steep ascent to Meal Fell, which had a stone shelter and multitude of small cairns marking each and every high point.

Having visited them all we headed up to Great Sca Fell, but as we had already been on the summit a couple of weeks earlier, we made our way up to the col between the main summit and northern top.


From here it was easy walking to Brae Fell where we sat in the sun for a well-earned break and the scoffing of egg sarnies.  This is the first warm weather we have felt for months and after our sandwiches and coffee it was tempting to laze away an hour.

That said the ground was a bit too wet for laying around so we made our way back towards Great Sca Fell for a couple of hundred metres before striking off towards Lowthwaite Fell.  While not a Wainwright it is a pleasant route leading to Longlands Fell, our final Wainwright of the day.


These rounded hills mark the boundary between the lakes and the lowlands stretching off towards Scotland and despite the haze we could still pick out the Solway Firth and the Dumfries and Galloway hills beyond.  After this it was an easy stroll down to the Cumbria Way and then back along the track to our start point.

That's 105 of Wainwright's of 214 completed.  Three or four trips should take us below the 100 left to do mark if all goes to plan.

To the north of Skiddaw are the Uldale and Caldbeck fells.  With their rounded tops they are perhaps more reminiscent of the Pennines than the Lake District.  Like the Pennines they are also quieter, making them an ideal choice for a last minute Easter Sunday wander with our pals Graham and Sandra.  We didn't really have a plan for ticking off hills other than to head out and enjoy a walk.  If we could pick up a couple of Wainwright tops for Moira and I then that would be a bonus.

From the parking we made our way up Grainsgill beck to reach the snowline, which started somewhere around the 400m contour.  The ground however wasn't frozen underneath the snow, making it a rather boggy walk up to the wind scoured cairn marking the summit of Knott (710m).


From Knott we made our way across to Great Sca Fell.  At 651m this meant losing a few contours in the process and re-climbing them on the way back.  Once at the summit cairn we debated about continuing on to Brae Fell, but in the end decided to leave it for another day and head back up and over Knott to descend via Coomb Height.

Coomb Height (627m) incidentally is not one of Wainwrights tops and is really only a continuation of the broad ridge leading east from Knott.  It does make a nice descent route with some great views south across to Blencathra and then west over Great Calva to Skiddaw.

That's 101 Wainwrights completed.  The next target is to get below the halfway mark, so that's another 7 to do in the next few weeks.