Leaving the road that runs along Ullswater and entering Glencoyne Wood the light of my head torch seemed barely adequate for the task ahead. At 5.00am in the morning the last thing I wanted to do was make a wrong turning and end up walking up the drive of one of the houses that were marked on the map. Fortunately it does not take too long for the eyes and senses to adjust to the darkness and I managed to avoid any navigational errors.

As I walked towards the buildings of Seldom Seen and began to climb the wooded slopes above, a Tawny Owl screeched a warning to intruders, a few minutes later across the valley the single bark of a fox indicated I was truly among the seldom seen. I am sometimes asked if climbing up and down mountains on my own in the dark bothers me. While there are occasions where it feels a bit spooky and you sometimes get that feeling of being watched I am not really bothered by the noises of the night. Indeed I tend to find them comforting and would rather be out here alone in the dark than in some urban jungle where nocturnal predators from my own species are much more likely to be prowling around.

Gaining height steadily I eventually left the confines of the wooded lower valley and could clearly see the dark outline of my intended mountain, Sheffield Pike (675m) to my left. Navigation now was easy and all I had to do was follow the field intake wall on my right and when it ended, trend up a well-worn track to the col at Nick Head. Shortly after arriving at the col I thought I heard a stag roaring to the east and sat quietly for several minutes with my torch off listening. Nothing, perhaps I was mistaken, but then again I know there are Red Deer around Haweswater and the hills above so it was certainly possible. After a quick break and a drink I made the short climb to the summit with plenty of time to spare.

Standing among the summit rocks I gazed out over the still dark valleys. To the south west and much higher than my summit the familiar outline of Helvellyn (949m) blocked the view, although in the darkness it was impossible to pick any details of its famous ridges. To the north along the length of Ullswater and above the lights of Penrith I could clearly see the dark mass of the Pennines. There floating above the Eden Valley on a band of mist stood Cross Fell, Little Dun Fell and Great Dun Fell, each outline clearly etched against the pre-dawn sky. I could even spot the shape of the Civil Aviation Radar on Great Dun Fell itself. To the right of these I could also pick out Knock Fell, Meldon Hill and Mickle Fell - all mountains I have had the privilege to stand on at one time or another. 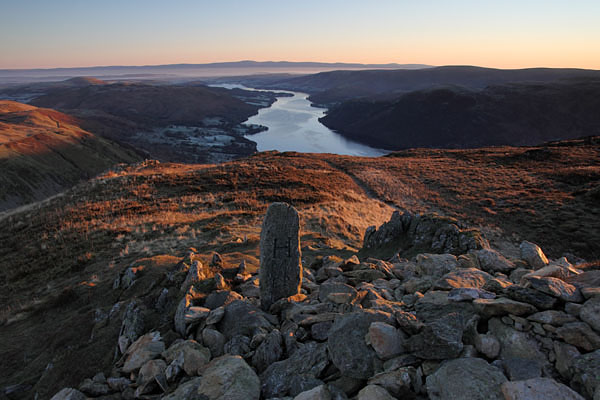 
Eventually very slowly, almost imperceptibly, night began to give way to day. Using pastel shades and sweeping brush strokes of light Mother Nature slowly began painting her canvas from the east. Firstly starting at the horizon the stars slowly faded as she gently dissolved the darkness using soft shades of yellow, then a warm flush of red was gently added to help create an impression of warmth to come. This though was only the foundation and eventually the colours began to merge creating an orange glow that spilled over the eastern horizon. In that moment the onlooker and the surrounding landscape become a part of the scene absorbing the light and warmth of a new day. There is something truly primeval and hauntingly beautiful about standing on a mountain summit watching a sunrise. I could easily understand why our ancient ancestors placed such reverence on its passage throughout the seasons. At that very moment as the light spilled across the land I felt there was a spiritual link right back through time, an unbreakable thread between myself and those who walked this land thousands of years ago.

Once the sun appears the light changes very quickly and I always have the urge to rush the image making process. I can see so many possibilities yet know I will only have time to produce a few images before the light, transient as it is, will simply become a fading memory. On each occasion I have to make myself slow down and be more thoughtful in my compositions. Typically though some don't work quite as I hoped and I have to make a decision, do I persevere and take the risk of not producing that illusive perfect image, or cut my losses and look for a better composition.

Sometimes due to the topography of the ground and the direction of the light there must be compromises and this morning was no different. In the image below I would have loved to have avoided the blank area to the right and have had the rock spikes in a more central position, unfortunately a man made low shelter wall just out of frame to the left and the tumble down cairn next to it would not allow it. Still I think it works ok. 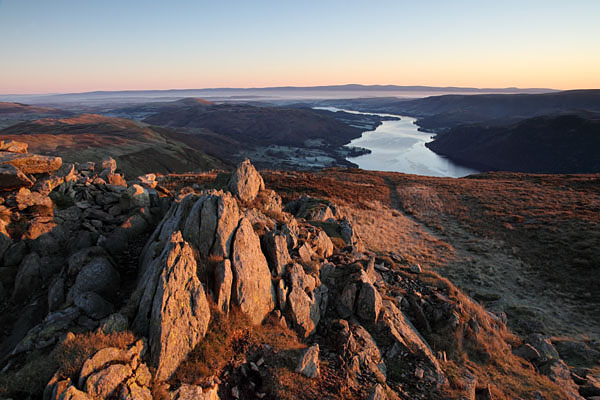 
Before the sun got too high I turned my attention to Helvellyn and Raise. 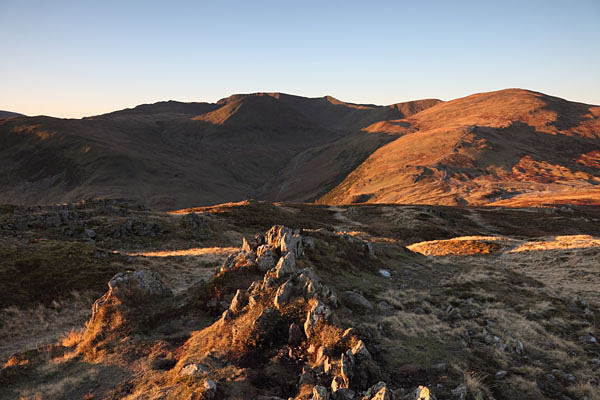 
I then moved a little way south east from the summit to get a better view of Ullswater. 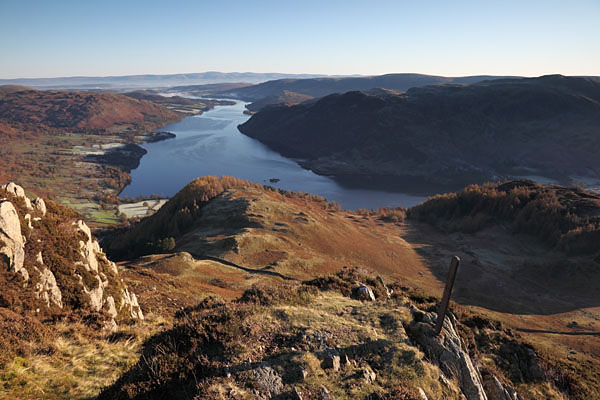 
Eventually when the light became too harsh I headed down into the valley to capture some autumn scenes along the wooded shore of Ullswater. 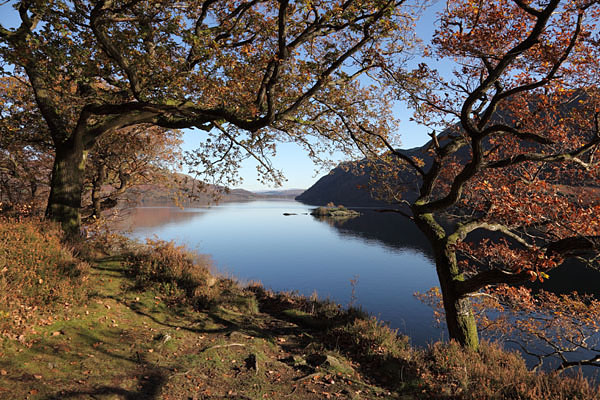 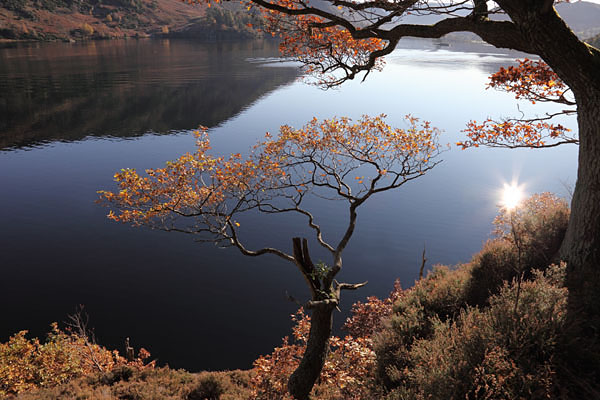 All text and images copyright David Forster
Posted by David at 12:25