Sitting in a warm campervan with the rain running down the windows made it quite hard to get going this morning.  We did not have much of a plan other than to get out and do something and as there did not seem much point heading onto the tops if it was going to rain all day, we compromised and decided to walk up to Hayeswater via Brothers Water and Hartsop, and then head up to where the path splits below the Knott.  At the path junction we would then turn left to head across to Angle Tarn and Boredale Hause, returning back along the valley.

From Sikeside it was a bit of a wet trudge along the shore of Brothers Water to Hartsop village.  Snow was forecast on the tops but here with just a T-shirt under the waterproofs it was still too warm. Snow it has to be said seemed highly unlikely.

From the little car park at Hartsop we took the left hand track up towards Hayeswater tarn where we were surprised to see the dam and bridge have been removed.  A new bridge has now been erected a few hundred meters downstream and fortunately for us having come this way many times before we decided to try the new variation.  It a good job we did otherwise it would have been either a splodge across the stream, or a return back down the track to the new bridge (sorry no pics cos it was lashing down).

By the time we reached the wall where the path to the Knott and High Street splits off we noticed it had suddenly become colder and within a few minutes the rain had changed to sleet.  Despite having to put a few layers back on this was a positive sign that the front had passed and colder air was now drawing down from the north.  Perhaps we would get some better conditions after all.

Moving on towards Satura Crags a few breaks began to appear over towards Dove Crag.


Ten minutes later the skies began to rapidly clear and we hardly knew which way to point the camera there were so many possibilities. 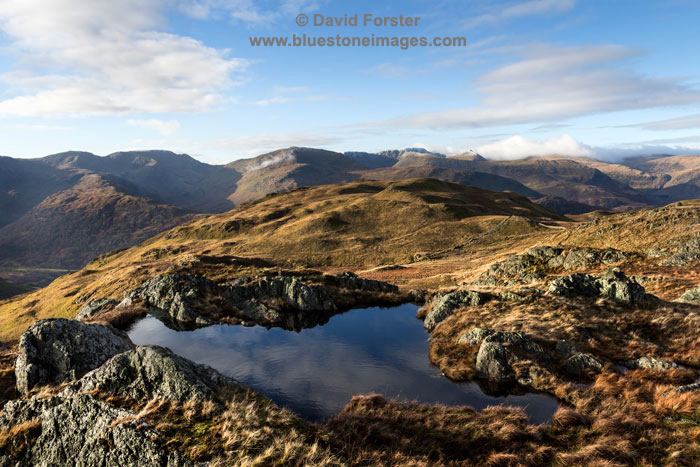 Moving on we headed across to Angle Tarn

Then on to Boredale Hause.

To return we headed back along the valley to Brothers Water.
Distance just over 13K