Every Man and His Dog on Blencathra

Last Saturday Moira, Graham, Sandra and I planned to do the easy scramble up Hall's Fell ridge on Blencathra.   Unfortunately the forecast was rubbish with rain and hill fog predicted.  There was a little two hour window expected and as we made our way to the base of the hill things were looking a bit brighter.  That proved to be as good as it got and we had barely started up the ridge when the rain started again and the mist came down to meet us.   Not ideal conditions especially as the rocks were pretty slippery, but that said we knew anything awkward could be avoided on the left, or right, on easier ground. 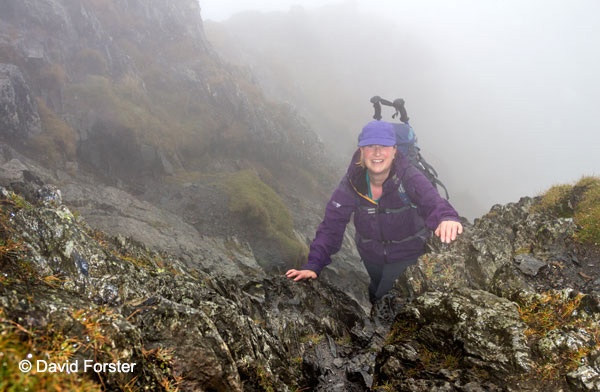 Despite the rain it was still good fun finding a way through each mini crag and with the mist hiding our progress were surprised at how quickly the summit came.

We had hoped to have a break on the summit, but as it was raining even harder by now we simply grabbed a quick pic and feeling a bit wet and bedraggled dropped straight down Scales Fell, stopping only briefly for a quick break to grab some food and drink.

Photography wise it was a waste of time, but with the forecast for Monday mentioning thick fog (read temperature inversion) I decided to drag myself out of bed at 3.00am and drive back over.

Making my way up the Scales Fell path it felt unseasonably warm and I could see the air was full of moisture as my torch beam swept back and forth.  It wasn't a fog as such, only a very thin veil of mist hugging the lower slopes.  To the east the valleys however were hidden by grey cloud, which in places was thin enough for the lights underneath to give them an eerie yellow glow.  Plodding on for perhaps a hundred metres or so I suddenly broke out into clear air, so clear in fact that even in the dark I could easily pick out the radar station on the summit of Great Dun Fell, way across on the Pennines. I could also see that I was not alone up here and across the valley I could see the light of someone making their way up from Mungrisdale, below me another light bobbed along just above Scales Tarn.

I had the summit to myself initially and spent the time trying to work out a few compositions and capture a few shots of the pre-dawn colours. 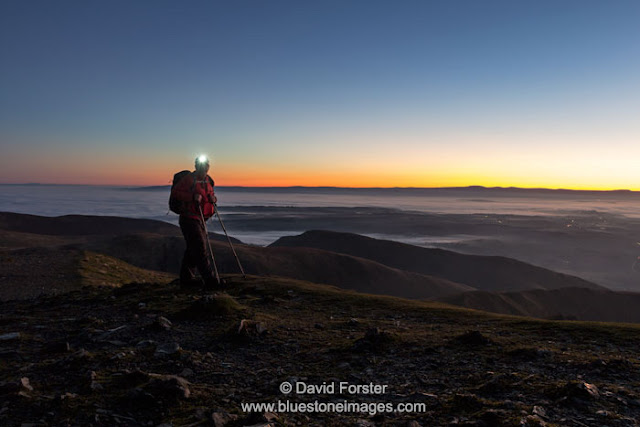 Twenty minutes or so later the first person arrived, followed a few minutes later by another.

Not long after, to the sounds of electronic beeps and clicking shutters, the sun made an appearance. 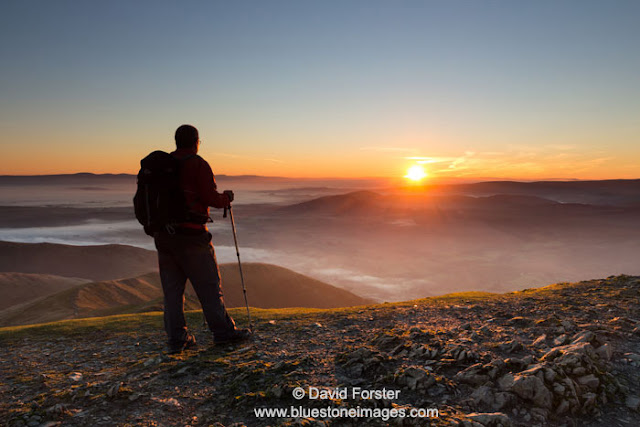 Having grabbed a few shots directly towards the rising sun it soon became too strong even with filters so I dropped down Hall's Fell ridge a little way to a point where I was able to grab a few shots westwards.

I like to shoot a mixture of both pure landscapes as well as people in the landscape and in the absence of a suitable model I had to keep walking into and out of shot myself, which does make these look a bit posed.

By the time I got back to the summit one man and his dog had also turned up. 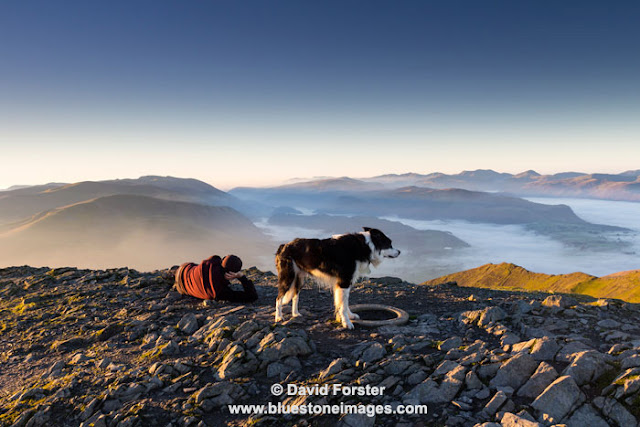 By now the light was beginning to get much too harsh, but not wanting to head down just yet, I headed west towards Knowe Crags instead.  There are lots of good viewpoints along the way, one of which was already occupied by a photographer.  I thought it would make a half decent shot so wandered over only to find it was Terry Abraham, aka Terrybnd, shooting some more footage for his documentary Life of a Mountain - Blencathra.  After grabbing a couple of shots myself we had a chat for while about photography and what we had managed to capture this morning. 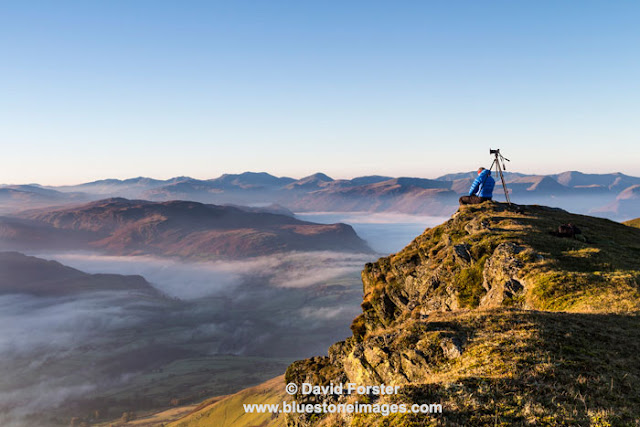 Normally I hardly see a soul on these early morning trips, never mind speak to anyone, but today had proved quite a sociable outing.