A Lucky Escape and Tragedy in the Yorkshire Dales

The Pennine hills have borne witness to many stories of epic struggles, lucky escapes and of course tragedy.  These stories don't always relate to hill walkers, or other outdoor enthusiasts and it may surprise some to know that aviation plays a significant part in the history of these lonely windswept moors.


The Pennines have always been a place to fear for aircrew facing bad weather, or mechanical problems and the remains of numerous aircraft that have failed to return to base are testament to this.


I recently planned a walk to explore the area around Castle Bolton and working on the theory that time spent doing research is seldom wasted I managed to find out there were two such air crash sites on the high ground to the north of the village.  One relates to a Gloster Javelin Jet, which crashed in 1959 and the other relates to a DeHavilland Mosquito TA525, which crashed in bad weather in 1946.


My initial plan was to head up Apedale and return via a track which runs from the mining grounds on Bolton Moor back to Dent's house in Apedale and a further look at the map showed I could take in the two sites with only minor detours.


This is open access land and after making my way along Apedale via the bridleway I struck off over the moor to find the general area where the Gloster Javelin came down.


Being a grouse moor you can never be too sure of the welcome you will receive if you are spotted wandering around well away from established footpaths, but a friendly wave and smile from a passing farmer on his quad bike gave me a little boost of confidence.  I know I have every right to be there but I think I still have a few hang ups from all those years before right to roam where people were regularly hassled by over zealous gamekeepers and landowners who claimed that having people on the moors at any time of year (other than them of course) harmed the wildlife.  Years into the right to roam such opinions are now seen for what they were - rubbish - and if anything the presence of the public is probably helping the wildlife in that we can now see what goes on.


Anyway it was with thoughts like this rattling around my head that I continued on my way.  Weather wise while the sun was shining the wind was pretty strong at times and on a couple of occasions I was blown completely to a standstill.  Fortunately the wind unintentionally helped me and as I moved up towards some grouse butts I heard the clack clack of metal hitting metal carried on the wind.  After a bit of a scramble out of a deep peat hag I spotted the wreckage scattered across the fell side about twnety meters away.

This was the site of the Gloster Javelin F.A.W Mk.5 XA662 of 228 Operational Conversion Unit which crashed here 29th September 1959.  The story behind the incident is that the crew took off from RAF Leeming and while over the North York Moors one of the engines developed a fault.  A short time later the second engine was also shut down due to a fire warning.  Fortunately the crew - Flying Officer C P Cowper and navigator Cpt R E Nietz successfully ejected from the aircraft and survived.


The wreckage is pretty extensive and spread over an area of around 200m.  The engine jet-pipe is perhaps the largest visible component at around 10 feet long. 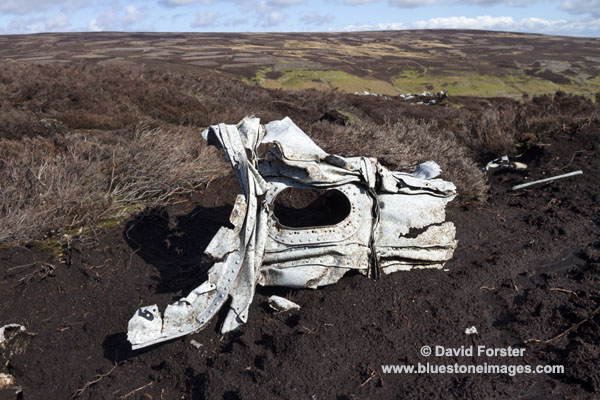 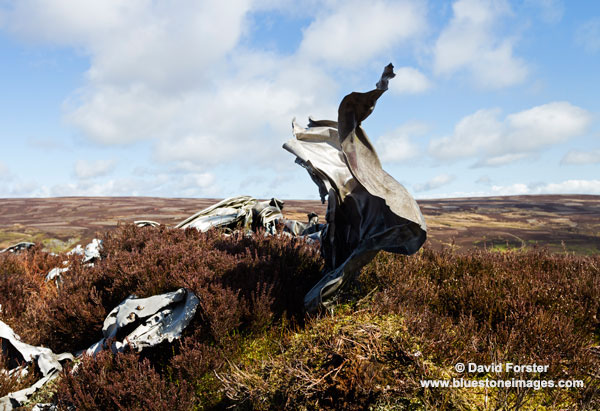 The occasional rattle caused by the two pieces of metal above that kept hitting each other in the strong gusts gave the place a bit of an eerie feel and after grabbing a series of shots I soon moved on.


Joe Bosher gives a short account of his role as a member of the RAF recovery team here.

The second aircraft lay a just over a kilometre as the crow flies on the other side of the hill, however as I also wanted to visit some of the mine workings here I struck off across the moor to have a look at these first.  Unfortunately very little remains of these other than collapsed shafts and spoil heaps and any photographic potential I thought they might have had when looking at the map was pretty limited, especially so considering it was midday and the light was rather harsh.


Heading south I soon came across the shooting track which was followed for a kilometre or so to the area where the second aircraft lay.  Despite only having a general location for the aircraft I soon found the site.


This and some more wreckage further along the scar is all that remains of the De Havilland Mosquito TA525 which crashed here in thick cloud on the 14th February 1946, killing the 27 year old Dutch pilot Sgt Gebines La Hei instantly.  It is thought that Air Traffic Control had actually instructed him to climb but he did not manage to do so in time. 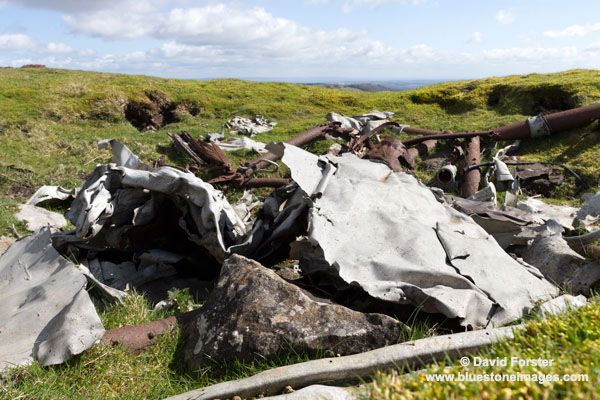 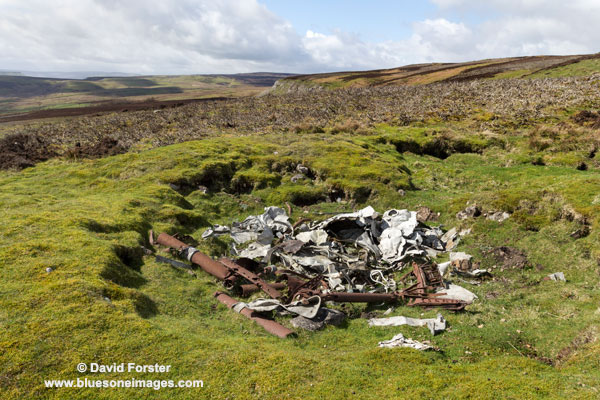 There is no memorial here only a pleasant view down the valley and the sad realisation that in those conditions there was little room for error and he probably only had seconds to react.