Memories of Getting High

Sometimes you cannot help but be in a reflective mood when you sit atop some mountain with the breeze on your face and the world laid out at your feet.  The mountains tend to create a mood to reflect, plan and clear the mind.  It's the perfect location to defrag the hard drive of the brain, but that said, it can also be something of a melancholy experience.

I met a friend I had not seen for perhaps 20 years while on the hill the other day.  We chatted about what we had been up to, compared our ailments, discussed plans for the future and generally caught up.  When we parted I felt really unsettled, almost a sense of loss.  Not for the loss of a friend, but of a lifestyle that had not just slowly slipped away, but simply stopped overnight.


The year 1995 was a time of wonderful highs in cleanest sense of the word.  By that I don't mean the highs a drug gives you, I mean those life long endorphin highs the mountains give you.  The kind that leave their mark etched on your brain - from mountains hard won, from fears controlled and of friendships and hardships shared.

Of nights sleeping below thousand foot faces with nothing but a bivy bag and a down jacket in order to keep the weight down. Cold seeping into the bones, wishing the night away in fitful dreams - half sleeping half awake - who knows? but time passed as it always has.


And when sleep would not come lying there staring up at a billion stars, listening to the sounds of the mountains, their dark silhouettes etched against the pre-dawn sky. The purr of the stove, endless brews and wondering if the others were awake.  They usually were - well apart from Carl, he always slept. Then still in the dark the act of forcing stiff muscles and cold bones across to the base of the route.


Sunrise striking the tops, but an age away from warming our bodies, instead warmth had to come through activity and those first few shaky pitches.  Confidence rising with the sun as the sun line came down to greet us.  Welcome at first, but with the glare from the limestone it would soon become too hot.

The crux building in the mind with each move, inching forward, the void dragging at your heels. Being careful not to over-reach, use the feet, shake out the arms and clip the pro. Suddenly it's over, big holds, more protection and the tension eases.


A few more moves and a bomber belay awaits.  Safety checks done, toes on the edge, let the rope take the weight and lean out.  Looking down hundreds of feet past unseen companions somewhere below the overhang. 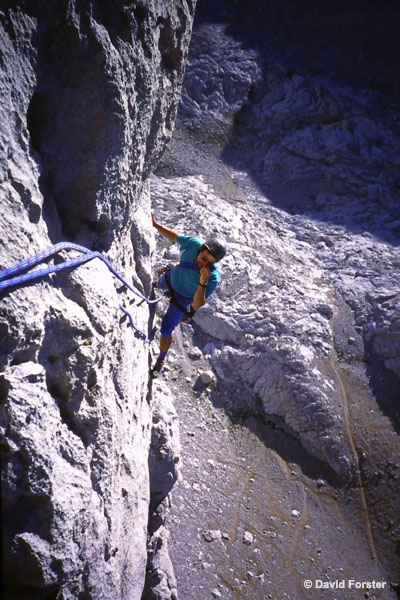 More pitches, a bit of banter and laughter and a pause for the odd photo.  Now and again a hint of fear as arms tire and the protection begins to space out. Suddenly shouting in Spanish - a curse, or a warning perhaps, but then the sound of a falling rock thrumming past over to the left. I wonder what the Spanish is for BELOW?  A bit more laughter - nervous this time - but no harm done the overhangs protect us..... for now!


Pitch after pitch, nearly three hundred metres worth. Then the crest, easy scrambling and the summit beckons.

Suddenly we hear voices, French, Spanish and German perhaps.  It's the summit - cracking views and a little Madonna statue watching over us.  Chatting with the other climbers in a mixture of gestures and badly pronounced language, more laughter, some food and drink - relax - but only a little because the job is only half done.


Time to head down, time to refocus.  An un-roped scramble into the amphitheater, followed by tense abseils to the base of the route. 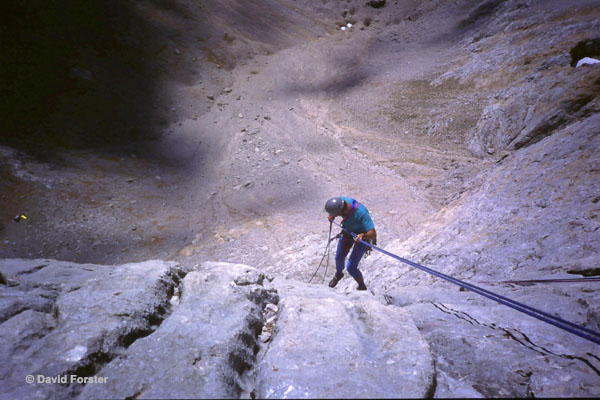 Nearly there, just about to pull down the last rope and then an unmistakable shout in French from above "ATTENCION".  Stones clattering down, a moments panic and I learn a new Spanish word from the team beside us, "Va, Va" GO, GO and everyone ducks in close to the rock.


Back to the bivy site we grab some more food and drink and then its the long, long walk back out in the afternoon heat.  A days rest and then do it all again.  I felt as if I was living my life in HD.


Those were the last big routes I ever did and two months later I was in hospital with a knackered back and nerve damage in one leg, waiting for an operation.  It was nothing to do with climbing, just a lifting accident at work that took it all away. It was a lifestyle lost, but it still lives on etched in my mind.