Rescue on the River Tees

I spent part of the afternoon photographing a river rescue above Low Force in Upper Teesdale the other day.  The situation came about when four teenagers got trapped on one of the islands after heavy rain upstream cut them off.  Generally it's not too much of a risk to visit these islands in settled weather when the southerly channel is dry, but of course people from outside the area don't realise how fast the Tees rises here.  In fact it only takes a few minutes for the islands to be cut off completely. 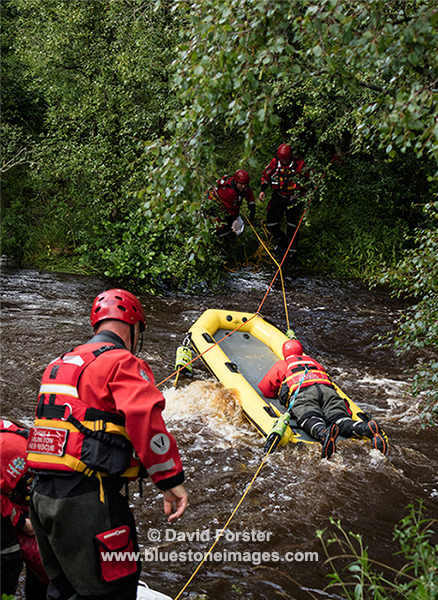 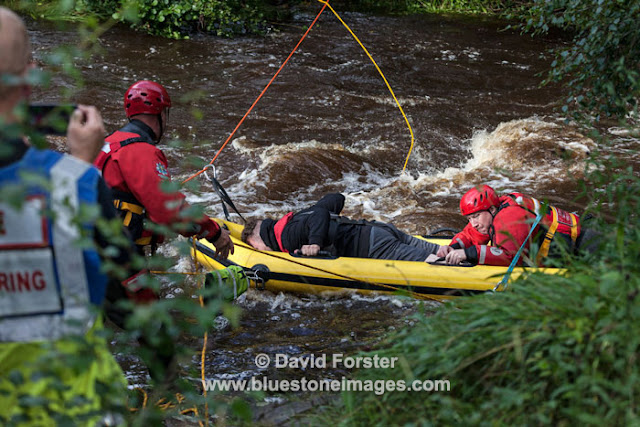 Once they had been safely rescued I kind of felt sorry for the youngsters.  In part because I heard them get a bit of a talking to by one of the rescuers, which to be fair was probably all that these young people needed at the time anyway.  They had after all just experienced first hand what can happen to the unwary.

Mainly however, it was because I knew the incident would bring out the keyboard warriors on Facebook and elsewhere.  Many of which have obviously never been young, made a mistake, or experienced a bit of bad luck.  A lot of the most vocal of course will never have done anything remotely adventurous, but all the same they were lining up to comment and pass judgement.  Some were even critical of these youngsters for swimming in the river.  The fact they did not get into difficulties swimming and had actually been camping on the island did not seem to matter.


Of course it is easy to play the blame game - my pet hates as it were - are people who head out without a map, and those who don't carry a torch when out in the mountains.  It winds me up every autumn when the clocks change and the callouts start, although to be honest it is more to do with the bad publicity it generates for more responsible hill walkers, who get tarred with the same brush, than anything else.  In reality of course criticising people on social media is unlikely to help anyone and may in fact may make inexperienced people too cautious when it comes to making that call to the emergency services.


The important message in this recent rescue really should have been about educating people who don't know the area and highlighting how rain further up in the dale can cause flash floods, even I might add, if it is not actually raining where you are.  To be fair a number of people did try, but sadly it was lost among the general noise of uninformed comment and criticism.  The incident did get me thinking about my own experiences of the river as a youngster and how we learned about the dangers.

Despite its reputation locally, it's worth noting the Tees is a much tamer river than it was before Cow Green reservoir was finished in 1971.  There are many stories and tales linked to the Tees and the threat it posed for the unwary.  One story passed down by word of mouth is linked to the "Tees Roll", a wall of water that used to sweep down the valley from the hills above. The incident itself occurred during the 2nd World War when seven soldiers from the South Staffs regiment were trying to cross the Tees just upstream from Barnard Castle during a training exercise.   It is said they were trying to build a pontoon bridge when they were hit by a wall of water six feet high which swept them away.  Such was the speed and power of the water they never stood a chance - all were drowned.

As a kid the most sinister tale for me however, was that of old Peg Powler the river hag, a spirit who it was said would seek out unwary children and drag them down to a watery death.  These stories were passed down either from our parents, or by some of the old fishermen we came into contact with.  This never stopped us from floating down the river on old inner tubes, or jumping from the bridges on warm summer days though.  The stories did however make us wise to the moods of the river, especially the possibility of being cut off on the riverbanks and islands when fishing.  These stories, sometimes embellished a little for effect, meant the river often had something of an atmosphere.  Some days we would head down there and despite the fact it was a nice day for swimming, the river would have a real feeling of menace about it.  Sometimes the water would just appear dark and brooding, creating a sensation of unease in us.  On other occasions there would be patches of foam known locally as Peg Powler's Suds floating by.  This foam often appeared when the river was rising and we always took it as a warning.  At such times I used to wonder if old Peg Powler really was around.  On those days we would just fish, making sure of course to keep a wary eye out for a flash of green skin, or her shark like teeth grinning up at you.  Interestingly I still sometimes get that feeling of unease when I am around the river, especially so when photographing along its banks when the light is fading, or storm clouds are building.  Something hard wired and linked to a basic survival instinct perhaps?

For my own part my real education came from my time in mountain rescue.  Helping to recover my first body from the river and the realisation that through a mixture of a lack of knowledge, poor decision-making and of course bad luck, a life could so easily be lost.  It's worth noting that in all those years and many incidents later, I never really felt people should be given a hard time for getting it wrong, whether that was walking in the mountains, wild swimming, or whatever.  When you speak to the casualties, or indeed see the effect such incidents have on their families, you realise the last thing they need is people with the benefit of hindsight slating them.


Instead I always felt that the way forward was to try and educate people to the dangers.  Even today I still firmly believe that to be the case.


PS as usual blogger will not format the article properly, apologies for that.
Posted by David at 03:31