The Adder (Vipera berus) which is also known as a Viper is our only native venomous snake. Adders are a part of a family of snakes "Viperidae" which contain names you may recognise such as Eyelash Viper, Pit Viper and Rattlesnake - all of which are highly venomous and do kill people across the world every year. 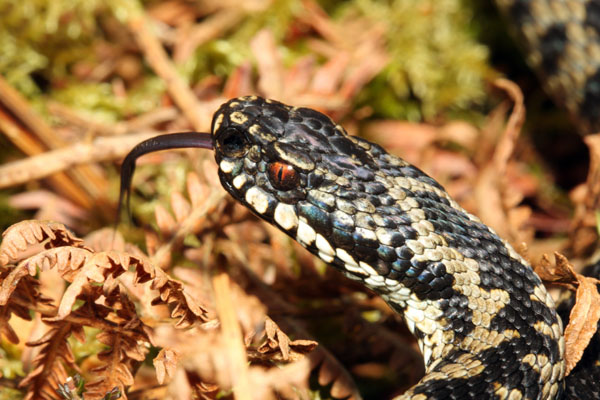 Close up of a male Adder (Vipera Berus)

Our own Viper while it is venomous it is not particularly dangerous to a fit and healthy human. That said a persons size and state of health matters and children are at greater risk from being envenomated, as are elderly people and those with underlying health problems. Allergic reaction to the venom is also a serious risk, but then again people die every year from severe reactions to bee and wasp stings.

Despite posing little danger to humans adders do get some seriously bad press and are often portrayed as killers who attack for no reason. In reality though adders are shy creatures who will not bite without a very good reason. The vast majority of those who do get bitten have either accidentally trodden on one, or more commonly tried to handle one.

In the UK around 100 people a year get bitten by adders and since the late 1800's there have been 14 reported deaths. The last death occurred in 1975. There is an interesting report here on the effects of a bite from someone who knows first hand what its like.

Distribution and Habitat
Adders occur throughout England, Scotland and Wales but are absent from Ireland, Isle of Man, Orkneys and the Shetland Isles. In some areas they are locally quite common while in others they are thought to have declined significantly, usually as a result of habitat loss. They can however be found in a surprisingly broad range of habitats such as high moorland, heathland, pine and deciduous woodland, in rocky dry areas such as quarries and in wet areas such as reeds and bogs. During the course of the summer they are known to move from one area to another to feed and breed before returning to their original area to hibernate (technically its really Brumation) during the winter.

Activity
Being ectothermic adders are only active in the warmer months from say early March through to October. I have however observed and photographed adders basking in the sun in late February only feet away from a snowdrift. At this early stage adders tend to stick close to the hibernation sites basking in the sun and preparing to shed their skins prior to mating.

Mating takes place in May and is often preceded by the "dance of the adders" where males spar with each other and with bodies interlaced try to force each other to the ground. The winner - the strongest then goes on to mate with the female who later gives birth to live young in August.

Feeding
As ambush predators they feed on small mammals such as mice and voles as well as reptiles and amphibians such as lizards and frogs. Being well camouflaged and having a fast acting venom the adder is a classic ambush predator which bites its prey and then releases it. The unfortunate victim reacts by running away however the venom soon takes effect and the snake simply follows the scent trail left by the fleeing animal. Once caught it will swallow its meal whole and will not need to feed again for some time.

How to recognise an Adder in the wild
If you have binoculars or a long lens and can see the eye clearly, the pupil is simply a vertical slit whereas all of our other native non-poisonous snake species have round pupils.

When viewed from a distance and despite the fact that the adder is quite variable in its colouration which ranges from dark brown to light grey, it has a very obvious dark zigzag pattern down its back. The only rare exception are those adders that are "melanistic" and known as "Black Adders". In reality however they are rarely completely black and the dark zig-zag pattern can often still be distinguished. 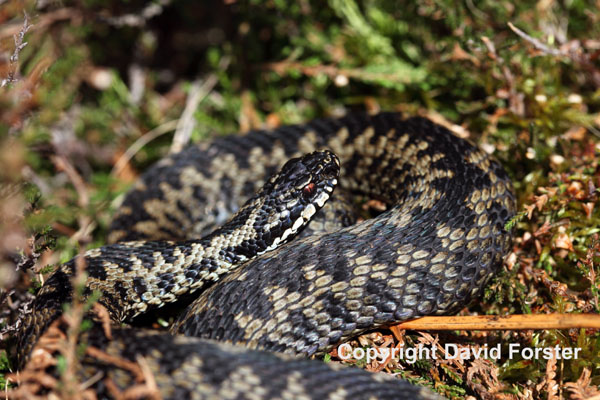 
So what should you do if you find an adder while out walking? The best advice is to simply enjoy the encounter and observe it. Don't get too close and don't try to pick it up. The latter point may sound blindingly obvious but only recently someone out for a walk in the Riverside Country Park at Rainham in Kent decided to pick one up and was bitten, while another individual visiting the Caswell Bay area, Swansea. was stupid enough to try and catch one and was bitten 3 times. Typically some of the press presented the Caswell Bay incident as an attack on a walker which led to claims adders were a menace and requests for signage to be put up. Those on scene however pointed out that the casualty had actually been trying to kill the snake so he could eat it. Perhaps this individual should also have been prosecuted as Adders are protected under the Wildlife and Countryside Act 1981 and it is an offence to kill or harm them in any way.

In short seeing an adder should feel like a privilege, not a cause for alarm.