Autumn is Just Around the Corner

Throughout its journey the river Tees passes though some incredible scenery. From the crashing violence of High Force through quiet and gentle wooded farmland to the industrial heartland of Teesside some 70 miles to the East, the Tees valley has much to offer the photographer.

In Upper Teesdale the area around Low Force has lots of photographic potential regardless of the season. On this particular visit though I planned to catch the early autumn light bathing not necessarily the trees as you would expect, but the ferns surrounding an old drystone wall I had identified during an earlier visit. On the previous occasion heavy rain and low cloud had not been conductive to successful, and to be honest, enjoyable photography and I wandered around without enthusiasm making a mental note of possible future subjects. The camera however stayed firmly in the rucsack and I had to resist the temptation of giving up and heading home.

Over the following days I kept one eye on the weather and eventually a frost was forecast. The following morning I made it to the area around Low Force waterfall well before sunrise. I was pleased to note that the ferns had now undertaken their seasonal transformation and were now resplendent in their rich autumn colours, which despite a coating of frost seemed to glow warmly in the pre dawn light.

To produce the image below I moved my camera equipment into position just as the sun turned the ferns into russet flames which appeared to engulf the end of the wall nearest the camera. I therefore decided to use the ferns as the main focal point to anchor the image while the wall itself was used to lead the eye into the frame. Balancing the strong early morning light reflecting off the frost covered grass was important to avoid overexposing the sky and losing the richness in the colours of the ferns. To balance the sky and the foreground I used a 0.6 ND graduated filter. This was coupled with a polorising filter to help retain the colours of the ferns. A series of images were then created using both a horizontal and portrait format. 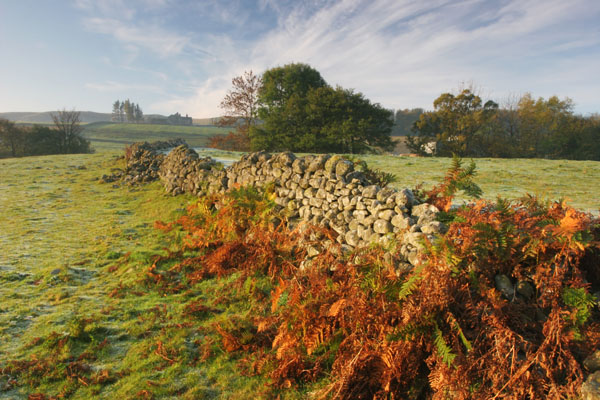 
Happy that I had captured the ferns in their autumnal colours and that the best of the light had gone, I then turned my attention to the river and the surrounding woodland. 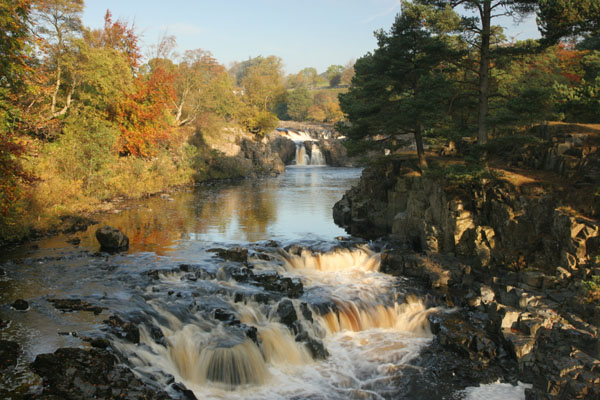 What a contrast to the day I wandered around in the rain without enthusiasm making mental notes for future visits. To use a military saying “time spent in reconnaissance is seldom wasted”. How true.