The mountain of Ingleborough is one of my favourite mountains. Aside from the great views and the range of possible approaches to the summit, I think part of the reason is the geology and the fact it still clearly carries the scars of its glacial past. From many viewpoints you can clearly see the valleys surrounding the hill have been deeply scoured revealing the underlying bands of limestone rock, atop of which sits Ingleborough with its cap of Millstone Grit. It is as if the glaciers have only just receded and the booming sounds of falling seracs and the strange bangs and cracks that anyone who has spent time on a glacier will recognise have only just fallen silent - in effect a visual echo of the past.  Of course when taking about geological time these glaciers really have only just receded and even now the landscape is still slowly springing back from the great weight of ice placed upon it.

Parking the car in the small parking area on the edge of Storrs Common I made my way up the rough Fell Lane track, stopping every now and again to look at the sky. It has to be said that it did not look too promising for photographs due to a milky band of cloud that sat stubbornly over the western horizon. In such situations it is very easy to feel that photographically it may be a waste of time, but then again if you don't at least try you are guaranteed to fail. Getting onto the scar well before sunset gave me plenty of time to explore the area and identify a few locations. In such surroundings the time raced by and encouraged by a few breaks in the cloud to the west I made a mental note of several possible compositions. Then as the light began to develop I set up several shots using both the still and video cameras. As is typical for me I found it difficult not to rush each shot and had to force myself to slow down and concentrate on only a handful of the myriad of possibilities that presented themselves.

Initially I focussed on the view west across the valley towards Twistleton Scar End and then later Whernside further to the north. 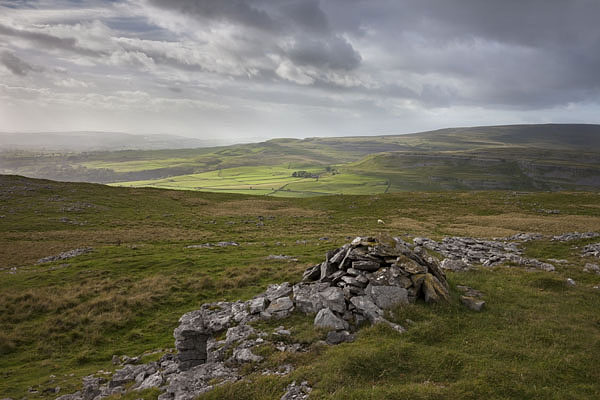 Twistleton Scar End and the view west towards Morecambe bay 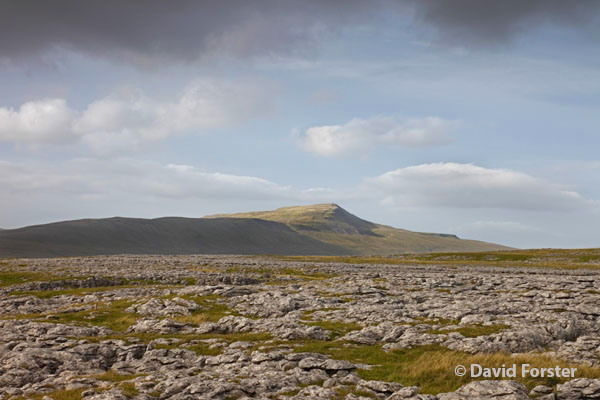 Whernside across the Valley to the north


A little later as the sun continued to penetrate the cloud and Ingleborough became bathed in soft golden light I set up a few more shots. 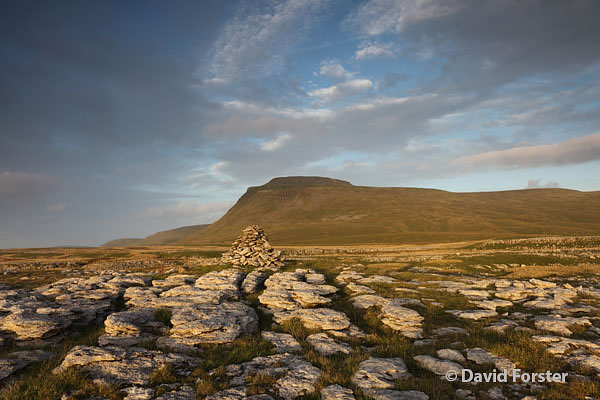 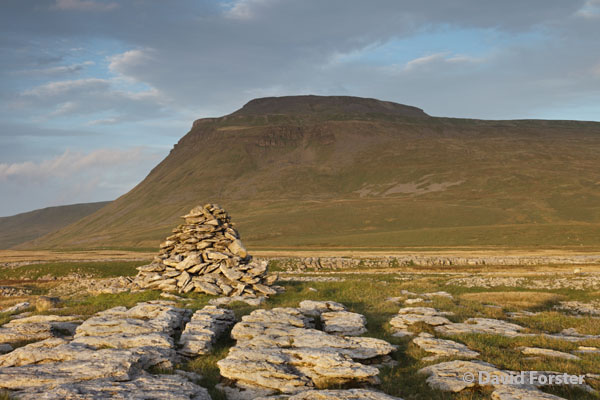 Finally the sun began to drop behind the band of cloud just above the horizon and I changed my focus to the view west towards to the coast and Morecambe Bay. 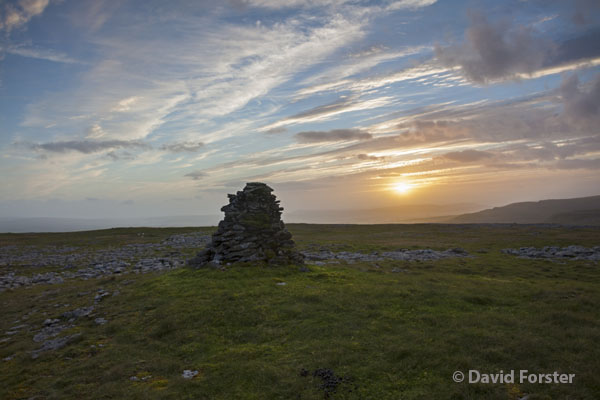 In what seemed like minutes the light show began to subside and darkness came on very quickly. Despite knowing it would be a descent over rough ground in the dark I found I couldn't drag myself away until every vestige of colour had left the sky.

Eventually I began to make my way slowly back very conscious of the fact that it would be easy to come a cropper while crossing the karst with its deep fissures and loose boulders. To avoid the worst I was careful to circumnavigate as much of the karst I had quite happily skipped across on the way in as possible. So instead of walking on a fixed compass bearing I detoured to the west slightly and then headed south to pick up the wall which would lead more easily to the Fell Lane track. It was no distance at all really, but in the darkness illuminated only by the small pool of light cast by my head torch it somehow felt a bigger undertaking. Making steady progress I reached a small scar across my path. While working out the best way to get around it a low growling noise to my left had the hair standing up on the back of my neck. I am not easily spooked in the mountains but even so I quickly switched the video camera to infrared and pointed it towards the sound. In the now digitised monochrome landscape of the camera screen two sheep stared impassively back. A growling baaaa interrupted by a deep hacking cough confirmed which one was the culprit.

Having switched to infrared I was amazed to see just how much landscape the camera could still portray and I now used it intermittently to help guide me through the scars and boulders back to the gate on Fell Lane. Forty minutes later I was back at the car.

As I arrived I noticed a campervan parked close by and heard the central locking go on the vehicle. Assuming they had locked the doors because a strange bloke had turned up, I was pleasantly surprised to see the door open and the lady inside enquire if I was ok and did I want them to switch on the outside light so that I could see better. A nice gesture to end a cracking day on the hill.
Posted by David at 07:34