I am miles behind when it comes to trip reports (20 plus days already) and there is no way I am going to get caught up.  Rather than miss yet another I will just put up a few recently processed images from my last trip up to Scotland.  This wasn't a photography trip so we simply walked, camped and enjoyed the hills without any constraints.


Gairloch Area
As you will probably have noticed on the blog recently I have been recording a number of air crash sites in the North Pennines as they are disappearing fast due to the actions of collectors.  While doing some research on these I also found out about several others in Scotland.  One of these was the crash site on Sidhean Mor of a B-24H Liberator Bomber serial no 42-95095 of the USAAF which crashed on 13th June 1945 killing all on board.


This incident took place right at the end of the war in Europe as American personnel and resources were either being redeployed for the war in the Pacific, or returned to America.  Details are sketchy, but it would appear the aircraft had developed engine problems and may have actually clipped the top of Slioch as some parts of it were found on the summit.  If that is the case it would certainly have been too low for the crew to abandon the aircraft and they may have been looking to ditch in the sea.  Sadly they did not make it and instead hit the high ground surrounding the Fairy Lochs. 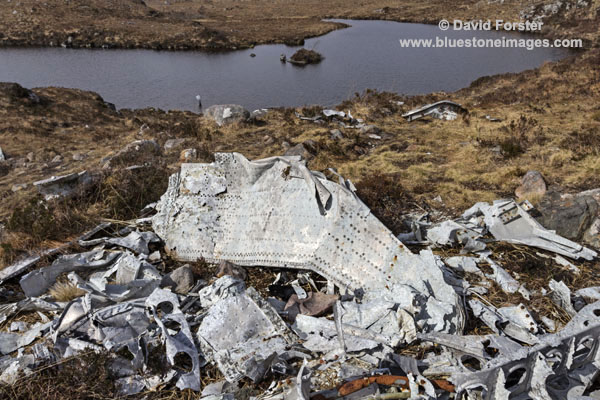 Assynt
A few days later we headed up to the Assynt area and on the way visited the Inchnadamph bone caves.  If you are ever passing the short walk up is well worth it and it's a place I intend to revisit for some more photography.


We did several mountains as well as valley walks in the area, but the best mountain day by far was bagging the three Corbetts of Spidean Coinich, Sail Gorm and Sail Gharbh which make up the Quinag hills. Despite having a rather brief visit to the last summit when the rain came in we had a great time.  The light was rubbish most of the day, but photography took a backseat anyway and we simply enjoyed the hills for the sake of it.

Coast wise it was wonderful wandering around the machair looking at the wildlife, or simply passing the time watching the waves roll in while beachcombing.


A couple of my favourite seascapes from the trip.