Harris, Lewis and Beyond Pt1

A trip to the Outer Hebrides has been on my increasingly long list of places to visit for years and after reading blog posts by James and Chrissie it was time to get on with it.

Accompanied by Moira and friends Graham and Sandra the trip started well when we spotted a Minky Whale within the first ten minutes of leaving Uig on Skye.

On reaching Tarbert we headed straight out to Huisinis to park up in the dunes.  The attitude to campervans is very relaxed here, but even so I had a chat with a guy working in a little hut close to the beach and provided we did not park outside of the roped off area he said we were welcome to stay.

Being the back end of the year we were prepared for bad weather, but it was still disappointing when it started lashing down next morning within a few minutes of setting off for our walk.

We had planned a longer walk up Glen Cravadale, returning over the hills of Huiseabhal Mor and Huiseabhal Beag, but unfortunately low cloud and driving rain meant we spent most of the time staring at our feet rather than the view, and on reaching Loch Crabhadail we decided to stay low and head back along the coast via the beach of Traig Mheilen.

Frustratingly it was at this point I found my 4 month old Meindl boots were leaking.  I think this makes it 5 pairs of boots in about two years.  The only consolation with these boots is they are all leather so I can at least slather them with lots of wax to put of the inevitable.


Early afternoon saw us back in our vans watching the rain stream down the windows. With dripping gear everywhere and our little heater on full any guilt at foregoing true wild camping and using a tent was soon forgotten over a bowl of soup.  Later a close up sighting of an eagle flying along the coast a few hundred metres away from us also kept our spirits up.

The skies began to clear in the evening so we headed out for short walk along the coast.

Returning in the dark I grabbed a few long exposure night shots using our head torches to paint in the foreground.

Next day we planned to do a hill, but instead low cloud and pouring rain saw us heading up Gleann Mhiabhaig to the Eagle hide.

After an hour or so we had supped all our coffee and eaten all our grub and with no sign of eagles in the murk we sloshed our way back down the glen.

In need of fresh water and toilet emptying facilities we headed to a campsite at Drinishader for the night.

Today was forecast to be better so we headed south to Northton in order to do a beach walk and bag a much needed hilltop view.  On the way we visited MacLeod's standing stone at Nisabost.

Once we reached Northton we had a few problems finding somewhere at the far end of the village to park.  There was a parking area marked on the map, but it turned out to be a cafe.  In the end we returned along the road to park at the visitor centre. It added a couple of kilometres of road walking to the day but with blue skies and sunshine it was certainly no hardship. Our objective was the nicely placed hill of Ceapabhal via some lovely beaches.


On the way we detoured to visit the lighthouse, chapel and broch indicated on the map at Rubha an Teampaill. Of the lighthouse there was no sign, but the remains of the broch and medieval chapel were still an interesting diversion.

A short, steep pull saw us onto the summit fairly quickly and for such a diminutive little hill the views were outstanding in every direction.


Instead of returning the same way we diverted slightly west and took a track through the dunes.

After spending a quiet night wild camping again we planned to climb An Cliseam but waking yet again to rain and very strong winds there was little enthusiasm for slogging up the hill simply to say we bagged it. Instead a quick visit to Tarbert for supplies and the forming of a plan B saw us heading up to visit the Callanish stone circles.

The forecast was for yet more heavy rain and storm force winds next day so plans for climbing mountains were again abandoned and low level coastal walks seemed the best option.   We got a tip from a really friendly guy from Norfolk who told us about a nice campsite next to a beach near Cnip which also had a few nice walks nearby.  On arriving we noticed our friendly Norfolk chap was already in the best spot and enjoying the wonderful views north over the many tiny islands that dot this coastline.  We grabbed what we thought might be a fairly sheltered spot and cracked open a beer.

I have been a tad worried on many an occasion while camping in strong winds with a tent, but last night was the first time I have genuinely feared the van would actually blow over.  We were not the only ones fearing for our vans and around 11.00pm the vans in front of us all abandoned their rather exposed prime viewpoints and either headed back into the dunes, or hid over by the toilets.

We had a little shelter from a small rise in the ground as well as Graham's vehicle, but even so the gusts were so violent I did wonder if I should move.  In the end concerns over driving into one of the many holes around us in the dark, coupled with the fact I had had a fair bit to drink meant we decided to stay put.  Sleep however was not easy and dawn saw a rather bleary eyed photographer staggering against the wind along the beach in the vain hope of some decent light.  Fortune as they say, favours the brave, and I was rewarded with a glimpse of the sun just as a heavy shower raced by.

Over a leisurely breakfast the wind had moderated quite a bit so we headed off along the coast to enjoy the spectacle of storm tossed seas and wind scoured sands.

By the time we reached the conjoined villages Cnip and Bhaltos (Valtos), which had a little harbour sheltered from the wind the sun was out.

Heading further around the headland where the coastline met the full force of the wind it was somewhat bracing and just a little intimidating to see massive waves breaking against the cliffs.  It is not an exaggeration to say that some waves were breaking upwards of 60 feet high as they hit the cliffs.  Despite this were lucky to spot a seal bobbing about in one of the more sheltered areas. 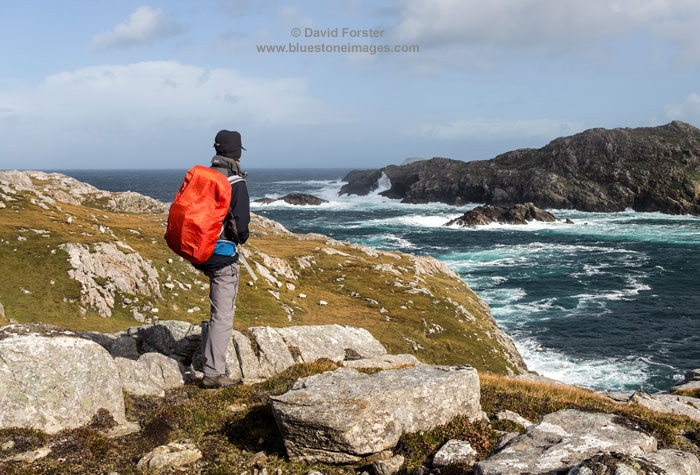 The gusty nature meant we stayed well away from any cliff edges but even so we were still able to get some good views.

Our final day was again dominated by yet more wet and windy weather so we headed north visiting the Blackhouse museum, a Norse Mill and the northern most point, the Butt of Lewis.


Next morning saw us back in Tarbert for the ferry back to Skye and despite days of strong winds the crossing was quite calm and we were even treated to a 10 minute long spectacle of porpoise swimming alongside the ferry and then diving under it.

So that was it our first visit to the Outer Hebrides and while we experienced a bit of mixed weather it tended to blow through quite quickly and by being flexible with our planning it meant we got out every day.  We will certainly be back for more.

Next Sandwood Bay and the beaches of the north.

PS sorry about the formatting, what I am seeing in the edit window bears no resemblance to what appears as it is published.