Burnhope Seat. A short Ski Tour in the North Pennines

Burnhope Seat sits on open access land straddling the border of Cumbria and County Durham.  There are no footpaths as such and all approaches are pretty boggy, making this a hill I prefer to visit in winter using skis.  If you are a hill bagger it is worth noting the trig point 746m is at the eastern end, but the true summit of 747m lies a couple of hundred metres away to the west, just inside Cumbria.

Ski touring in the Pennines can be a bit hit and miss at times.  Thin snow cover, wind scoured heather, rocks, peat hags and half frozen bogs to name but a few obstacles.  Throw in some typical North Pennine weather, and all in all, the skiing here can be rather challenging on occasion.

The Character Building Day
The last time we got the skis out for an ascent of Burnhope Seat, it is no exaggeration to say it was a character building day.  Things started out ok but within 20 minutes the weather started to deteriorate.  A total white out and winds so strong it was hard to remain standing tested both our both skiing ability and our navigation. 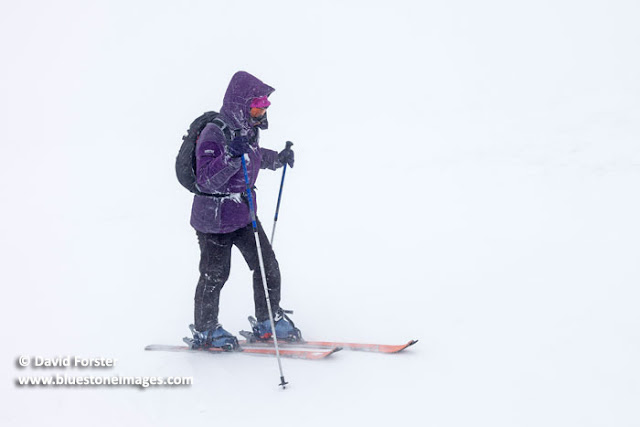 Perhaps we should have turned back, but as the forecast was not that bad we put it down to a localised squall that would soon pass.  For a short while things did improve a little, but when I couldn't find the summit trig, I did wonder what the hell we were doing there.  We must have come within feet of it on the first attempt, but arriving from its ice covered side it must have blended into the white out. Fortunately on the second sweep we came at it from a different angle and spotted it. Standing next to it, backs to the wind, were two other skiers who had only just arrived.

After a quick chat about the weather (what else was there to talk about?) they left to make their way down.  By the time we had grabbed a quick drink and a snack the weather began to deteriorate even further.  Turning tail we too headed back the way we had come.

At times the skiing really did feel a bit sketchy and to make matters worse my ski goggles gave up when the sponge seal disintegrated as I adjusted them.  This caused tiny bits of sponge to be blown into my eyes.  Then to make matters worse, with the seal now useless they iced up on the inside.  Stuffing them into my bag I skied blindly on. To cope with the wind and poor visibility we kept our skins on to control our downhill speed.  It was just over 2km from the trig point to out start point, but by the time we reached the car again we really felt we had had enough.  I know I certainly had and to cap it all I had sore eyes for a couple of days as well.

The Pleasant Day
Good conditions when they do arrive always make up for those less than ideal days and so it was for our latest outing on the skis. Today while the tops were clagged in, the weather was pretty benign at -4, with little wind and no precipitation.  Even better the forecast was for things to improve further.

Skinning up, all was silent save for the sound of the odd car heading along the road below.  Otherwise it was just the swish of skins on snow and the occasional cackle of grouse.  As patches of mist came and went we made a mental note to avoid a couple of stream gullies on the way back down, some of which had rather large cornices on them.  Normally these gullies just fill in, but over the last few days the wind had been blowing up slope before veering across slope, so not enough time for them to fill fully. 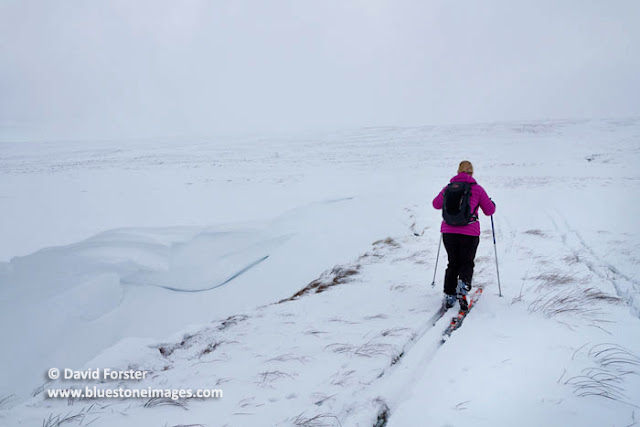 The snow was pretty variable too, but generally got better as height was gained.  Arriving at the trig point there was little to see other than the rimed up fences and the trig itself.  Occasionally the odd patch of blue appeared overhead so we were optimistic for an improvement.  Deciding to hang around we had a leisurely break and a warm drink.

We didn't have to wait long and 20 minutes later the cloud sank and broke up to reveal Weardale stretching out below us. 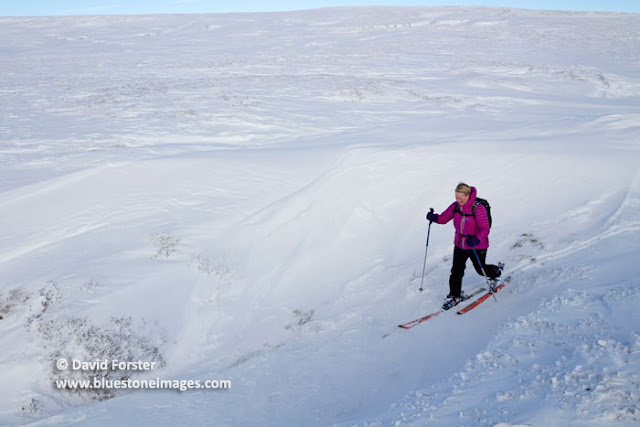 Skiing down, the conditions just got better and better and we had to keep stopping to look at the view.


Cross Fell and the Dun Fells soon appeared through the mist, as did Meldon Hill, all seemingly close, but in reality miles away on the opposite side of the Tees valley.

Part way down we met a kite skier who stopped for a chat.  Like us he enthused about the great conditions and told us he had been up here during the week too - all the way from Doncaster. 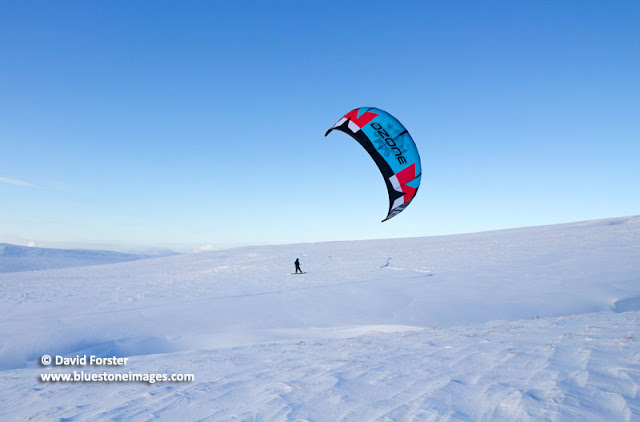 His enthusiasm for the area only slightly dampened by a gamekeeper telling him he was not allowed to kite ski on the open access land on the Teesdale side.  Sadly I had thought this kind of conflict relating to outdoor activities was a thing of the past in Teesdale, but apparently not.

All in all, we had a cracking day, although sadly probably the last one for a while as a thaw has now set in.  Even so, great conditions like this do make up for those less than ideal days.
Posted by David at 02:26