Wainwright’s - Beda Fell and The Nab

Of all the Wainwright’s the Nab was one I wasn’t particularly looking forward to. This is a hill where access restrictions are in place due to deer management and conservation.  Frustratingly despite this being open access land the walker is discouraged from accessing the fell by any of the shorter approaches/descents.  Instead you are expected to access it from the south via boggiest and longest routes possible. When deer management is taking place (being shot) between September and February then the whole area may even be closed to walkers.

Being outside of the culling season, but still I assume with restrictions in place ,our plan was to climb Beda Fell and then work our way around the head of the valley via Angle tarn and then access the Nab via the western shoulder of Rest Dodd.

Parking beside St Martin’s Church, which unfortunately was locked at this time of a morning, we made our way over Christy Bridge to take the path leading onto Howstead Brow.

Here there was a handy seat with good views towards Hallin Fell, Gowbarrow Fell and Place Fell, among others.

Next we climbed up to Winter Crag.

From Winter Crag it was a steady pull up to a prominent cairn which marks the north top of Beda Fell.

The actual summit of the fell at Beda Head is quite a bit further south.

The summit soon came and gave us some good views north over Ullswater.


From the summit the Nab looked a long way off and considering we had to make our way around the head of the valley it looked like it would be a quite an effort, especially so if we had to retrace our steps for a good part of the way.

For Moira and I being in the hills is not just about exercise and ticking off summits, we also like to explore a little. In particular we always keep an eye out for wildlife, or detour to seek out places with some geological or historical interest.  Some time ago I had read of a plane that had crashed up here during the Second World War. The aircraft, a Lockheed Hudson MK 5 (Serial Number AM680) came down here on 10th November 1942 while on a night navigation exercise.

Initial searches for the aircraft from the air were unsuccessful due to poor weather, but late the following day the aircraft was found by searchers on the ground.  Sadly none of the crew, John Frederick Saunders (Pilot), Derric Isaac Jones (Navigator/Air Bomber), Stanley Alfred Jones (Wireless Operator/Air Gunner) and Harold Dickinson (Wireless Operator/Air Gunner) survived the crash.

There is no memorial so I doubt many walkers would be aware of their sacrifice, but as we were to walk within a few hundred metres of the crash site we decided to stop off and pay our respects.

Not much remains now other than a few small pieces of aircraft where the aircraft impacted the hillside. If you walk this way perhaps you could spare a few moments to remember to the crew as you pass by.

Making our way around the head of the valley we passed Angle Tarn, but decided to miss out the summits of the nearby Angle Tarn Pikes and Rest Dodd as we had done these previously.

Traversing across to the northern side of Rest Dodd we eventually found ourselves looking over some very boggy looking peat hags between us and the Nab.


This section is notorious for its boggy qualities but fortunately the recent dry weather meant the boggy sections were not too bad and our feet stayed dry.  In the heat it was still a bit of a slog to the summit though.

To get back down it was a choice of either retracing our steps all the way back up to Rest Dodd and then around the head of the valley, or a much easier and rather more pleasing route down the open access land to the valley floor.

Back at the car we had a look around the old church and then headed outside to look at the ancient Yew tree which is thought to be at least 1300 years old. 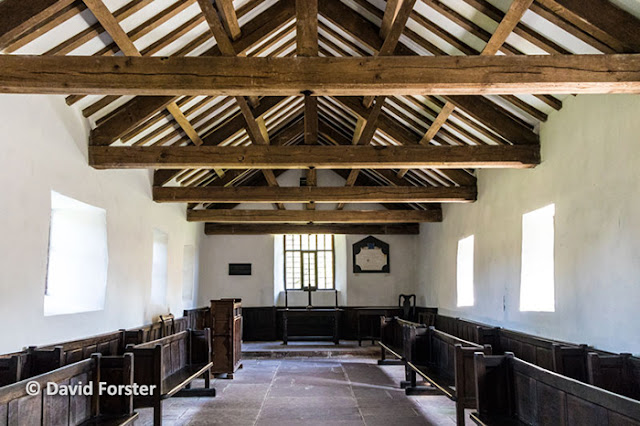 All in all a cracking walk, even if we did not see a single deer all day!.