This walk was yet another of those walks where we had done one Wainwright, but not the other.  We could of course have just bagged Bessyboot in a morning, but given how nice the weather was it seemed shame not to include Glaramara.

Under blue skies we made our way from Chapel House Farm along the road and up towards Thornythwaite Fell. 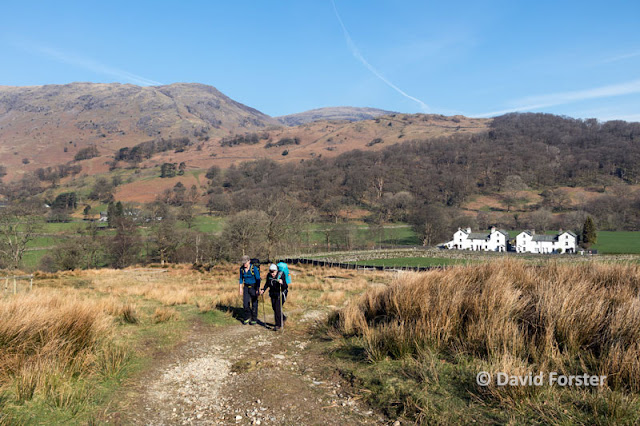 It was chilly in the valley but as we gained height in the sun we soon had to get rid of a few layers.


As conditions were dry we scrambled up onto the summit via the niche route.

The summit has several high points with cairns and in mist it would be easy to mistake one or the other as the summit.  We visited them all and on a day like today why wouldn't you, the views were spectacular.

From the summit of Glaramara we headed south a bit to avoid the crags before heading diagonally across the flanks of Combe Head towards the top of Combe Door.  From up here we could clearly see the ground we would be passing over to get to Bessyboot.  With all the crags, tarns and ups and downs, it is easy to see why it is a popular spot for navigation assessments and training.

After a short stop we made our way over towards Bessyboot via Rossthwiate Fell, passing several glassy tarns on the way.

The final ascent onto Bessyboot from Tarn at Leaves while short was rather draining energy wise.   It was at this point I also realised that as the only one daft enough to come out without a hat I had a badly sunburned face and head.

Back at the Tarn we followed the upper section of Rottenstone Gill before traversing around the lower flanks of Bessyboot and Buck How to take us back to our start point.